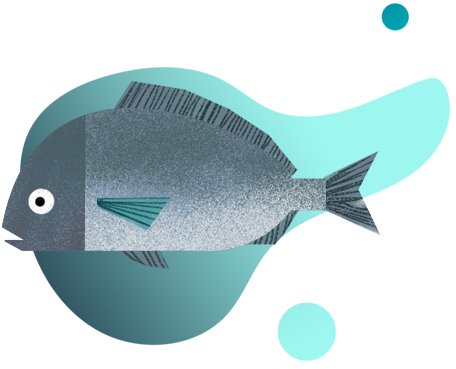 The seabream can be found naturally in the Mediterranean Sea, as well as in the eastern Atlantic Ocean, from the UK to the Canary Islands (Spain). Gilthead seabream is hermaphrodite, meaning that the first years of its life it is a male and the last years a female.
Gilthead seabream feed on molluscs, shellfish and small fish. In terms of farming, the seabream has become one of the main species in European aquaculture. The EU is the biggest commercial producer of this kind of fish in the world, Turkey, Greece, Egypt, Spain, Tunisia and Croatia being the main producers.

• In the EU, just over 90 % of aquaculture production is from farming six commercial species: salmon, trout, oysters, European seabass, gilthead seabream and mussels.
• The average first sale price for seabream in the EU is around 5 €/Kg.
• The aquafarming production of seabream in the EU was the third most valuable commercial species in 2017, accounting for about 10%.
• Aquaculture is highly specialised at regional and country level – Greece produced just over one half (53%) of the total EU production of gilthead seabream
• Like seabass, seabream is mainly presented as a whole portion sized fish in the chilled section of sales outlets, although new presentations and products are being developed.

1. NewTechAqua will develop new organic feeds evaluating the use of new organic plant ingredients such as gluten, rapeseed meal and sunflower meal as promising source not only of protein but also of fatty acids thus reducing the use of fish-derived ingredients. The development of new organic feeds for this species confirming to regulations established by the EU (2018/848) will allow fish farmers to reduce fish production costs and to increase their benefit margins. The close collaboration with feed producers, fish farmers and researchers will allow rapid exploitation of results paving the way to increasing production of organic fish in Europe.
2. Due to the difficulties to control parasitic infections of gilthead seabream in sea cages, the shortage of licensed and effective treatments and the need to avoid issues related to environmental impact and residues, the development of functional feeds effective against Sparicotyle chrysophrii will allow to implement practical and safe control measures of this parasite in sea cages.
3. Based on the examples of salmon farms experience, a predicting NewTechAqua pilot model will be developed and applied in 5 farming sites in the Mediterranean Sea to improve the management of the parasite Sparicotyle. The collaboration with fish farms will allow a rapid results exploitation paving the way to a further development of hi-tech tools to predict important disease in the Mediterranean aquaculture.
4. NewTechAqua will develop a fully dynamic predictive model for assisting the Precision Fish Farming implementation in an inland seabream farm. At the core of the approach is the development of seabream dynamic population models based on ecophysiological individual models, including data assimilation algorithms applied to ecological models. These algorithms are very promising, as they could provide crucial information in the interpretation phase. This will allow estimating non-observable fish farming variables such as fish appetite, fish ammonia excretion, fish oxygen consumption, among others and correct these estimates based on real data (e.g. O2, ammonia and pH levels, etc.). This information will be translated into real-time actionable suggestions, allowing operators to optimize feeding, oxygen supply and flow rates, and enhancing the control on released nitrogen in wastewaters.
5. Novel non-thermal sanitation and processing methods will be tested on pilot scale as an alternative approach to the conventional post-harvest processing methods, with the aim to obtain fresh and minimally processed products with improved quality and stability and high nutritional functionality. Static high pressure treatment (HPP) will be tested on minimally processed (e.g. fillets, tartar) seabream.
6. The valorisation of solid fish by-products (e.g. skin and scales, bones and residual meat) and wastewaters originated from the washing operations of fish processing of seabream (e.g. gutting, filleting) will be obtained using sustainable processing technologies. The properties of this by-products will be assessed for their potential utilization as new ingredients, livestock feeds and/or fertilizers