IRTA developed a biosensor prototype for the detection of Vibrio parahaemolyticus

Aquaculture production systems can be threatened by the presence of pathogens affecting shellfish safety and therefore consumer health. One of the needs of the shellfish industry is to guarantee the safety of their products. In this direction, diagnostic tools for the fast screening of pathogens in shellfish are highly desired. These tools should be sensitive and specific and have to allow rapid management actions. One of the goals of the NewTechAqua project is to increase the efficiency of aquaculture production systems. To this purpose, biosensors were proposed to improve shellfish farming management.

Willing to know more about the technicalities behind the development of this prototype? Please find below details of the experimentation carried out by the Institute of Agrifood Research and Technology (IRTA), our partner involved in the WP2 “Production systems and Big Data Analysis”.

The Vibrio genus is a group of Gram-negative marine bacteria that are ubiquitous in different aquatic environments (Simidu and Yasumoto, 1985). Some Vibrio species cause diseases in aquatic animals and within aquaculture settings, sometimes resulting in significant economic losses (Lafferty et al., 2015). In particular for Vibrio parahaemolyticus, while some V. parahaemolyticus strains are associated with marine animal diseases (Khimmakthong and Sukkarun, 2017), most of them are investigated as a major concern to human health. Since its discovery in the 1950s (Fujino et al., 1953), V. parahaemolyticus has become a leading cause of seafood poisoning worldwide. As a zoonotic pathogen, the virulent strains can cause vibriosis in marine fish and humans, leading to distinct diseases such as acute gastroenteritis, wound infection and septicaemia. Food poisoning is often associated with the consumption of raw or undercooked seafood. This is of particular concern with molluscan shellfish, such as oysters, which, in addition to commonly being consumed raw, are also known to concentrate microorganisms from the environment during the filter-feeding process (Potasman et al., 2002).

These facts have prompted interest in the development of diagnostic tools for the fast screening of virulent V. parahaemolyticus in shellfish. Biosensors are bioanalytical tools that incorporate a biorecognition element in intimate contact with a physico-chemical transducer. While the bioreceptor recognises the target analyte, the transducer converts the biorecognition event into a measurable signal, which in the case of electrochemical biosensors is an electrochemical response. Electrochemical biosensors harness the specificity and sensitivity of biological systems in small, low-cost devices. The combination of molecular techniques for DNA amplification with biosensors allows the detection of specific DNA sequences with high sensitivity and specificity. As not all V. parahaemolyticus are pathogenic, the specific detection of virulence genes present in V. parahaemolyticus is crucial. The thermostable direct hemolyisin (TDH) or TDH-related hemolysin (TRH), encoded by tdh and trh genes, respectively, are considered major virulence factors in V. parahaemolyticus (Raghunath, 2015). Taking this in mind, a biosensor prototype for the detection of the tdh and trh genes of V. parahaemolyticus has been developed. This prototype should benefit not only the seafood industry, but also the consumer, by ensuring shellfish safety and guaranteeing public health.

In the frame of the NewTechAqua project, several strategies have been tested. Among them, the one based on polymerase chain reaction (PCR), as DNA amplification technique, using tailed primers and coupled to a sandwich hybridisation assay (SHA) on magnetic beads, as capture probe immobilization supports, was chosen. In this SHA, the PCR amplicons of dsDNA flanked by ssDNA tails hybridise with the capture probes specific for tdh and trh, immobilised on the magnetic beads, and subsequently with the reporter probe, which is labelled with an enzyme (horseradish peroxidase, HRP) for signal generation. The preliminary characterisation and further optimisation of the system were performed using colorimetric measurements. Afterwards, the oligocomplexes were immobilised on magnetised screen-printed carbon dual electrode arrays for the electrochemical recording and, therefore, the biosensor prototype was obtained (Figure 1).

Figure 1. Biosensor prototype for the detection of the tdh and trh genes of V. parahaemolyticus.

Table 1. PCR primers and probes for tdh and trh.

Afterwards, the PCR was coupled to the SHA on magnetic beads. To optimise the amount of magnetic beads, trials were performed using 10 µL and 20 µL of oligocomplexes. Although the trends were the same, higher absorbance values were achieved when using 20 µL (maximum absorbance at λ = 620 nm reached values around 0.70 in front of 0.35) and this amount was used for further experiments. The amplicon amount used for the hybridisation with the capture probe-magnetic beads was also optimised. Absorbance values achieved were similar when using 20 µL and 5 µL of the amplicon but decreased when using 2 µL. Consequently, 5 µL of amplicon was used in the subsequent experiments, as saturation of the capture probe-magnetic bead conjugates was observed when using this volume. The amount and ratio of tdh and trh primers in the PCR was then optimised. Colorimetric results showed that a ratio of 2/1 tdh/trh primers, using 0.1 µM tdh primer concentration and 0.05 µM trh primer concentration, enabled proper amplification of both genes, allowing discrimination from non-specific responses.

After optimization of the experimental parameters, the final step in the development of the biosensor was the shift from colorimetric to electrochemical detection. To this purpose, oligocomplexes were immobilised on magnetised screen-printed carbon dual electrode arrays (the tdh oligocomplex on one electrode and the trh oligocomplex on the other one) and a special redox mediator, which is converted to an insoluble precipitate in the presence of the HRP-labelled reporter probe, was added. This insoluble precipitate, which will be formed only on the electrode where the specific amplicon is present, was measured by amperometry at -0.2 V vs. Ag/AgCl. Discrimination between positive and negative responses was possible for both tdh and trh genes, and no cross-reactions were observed between working electrodes of the dual electrode arrays. The corresponding calibration curves were then constructed using genomic DNA from CAIM 1772 (strain with tdh and trh genes) (Figure 2). Curves were fitted to a sigmoidal logistic four-parameter equation (R2 = 0.999 for tdh and R2 = 0.997 for trh; P < 0.05). Standard deviations were between 0.4 and 18.4 % (n = 3). Limits of detection (LODs), calculated as the mean of the blanks plus 3 times their standard deviations, were 0,0019 and 0,0018 ng/µL for tdh and trh, respectively (~2 pg/µL for both genes). 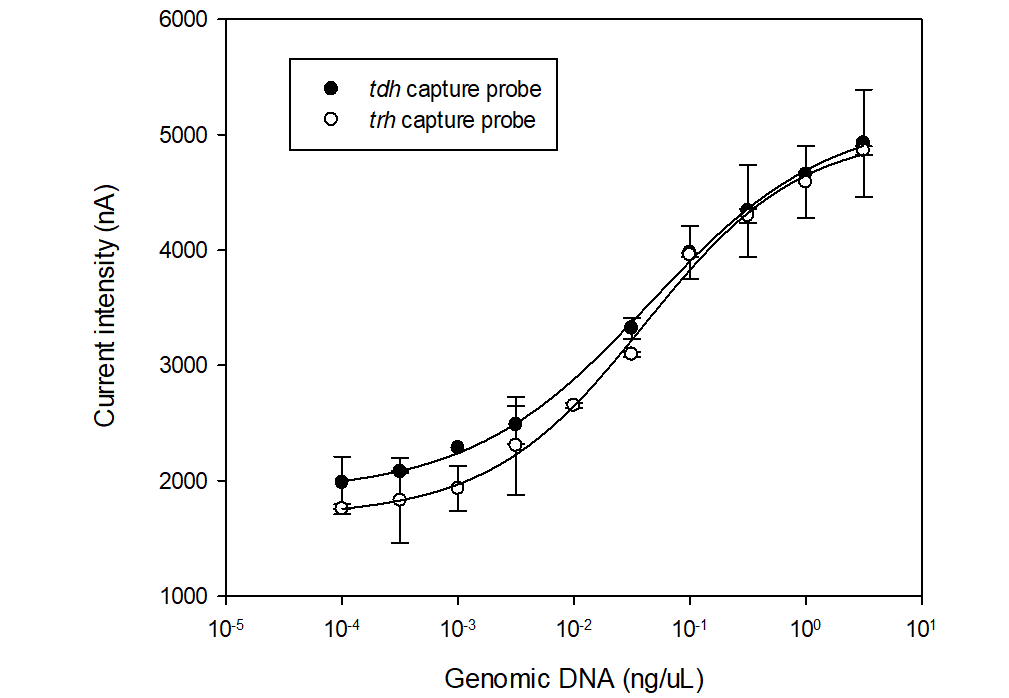 Summarising, an electrochemical biosensor prototype for the simultaneous detection of tdh and trh genes of V. parahaemolyticus has been developed by the immobilisation of oligocomplexes on magnetised screen-printed carbon dual electrode arrays. After optimization of the experimental parameters, calibration curves for tdh and trh genes have been constructed, attaining a limit of detection of 2 pg/µL in both cases. Cross-reactivity experiments with other potentially interfering bacteria have shown the high specificity of the biosensor. Therefore, the biosensor prototype is ready for the evaluation of its applicability to the analysis of shellfish samples and the subsequent validation studies.