Galaxidi carries out industrial-scale trials to validate a novel sustainable and cost-competitive aquafeed!

Galaxidi Marine Farm S.A. (GMF) stands amongst the oldest and most successful aquaculture companies in Greece. It is a vertically integrated company, exporting almost the entirety of its production, comprised mainly of seabream (Sparus aurata), seabass (Dicentrarchus labrax) and meagre (Argyrosomus regius).

Established in 1987 near the town of Galaxidi on the northern coast of Corinthian Gulf, Central Greece, the company takes its name from the town (Figure 1).

More specifically, IRIDA and IRTA collaborated to choose the best performing ingredient out of three new organic plant ingredients, and defined its optimal percentage of inclusion in the feed. The result of these trials showed that the best diet, in terms of growth performance, nutrient profile, as well as customer evaluation of the final product, was the organic feed with 8.5% of pea flour, 5% yeast, and 2% macroalgae flour. This is the feed that will be tested against a control feed, in a trial that involves two control and two experimental sea cages, and fish from ≈100g to 300g. 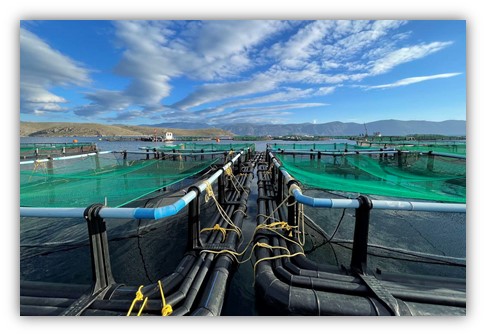 Here is a picture of the four trial cages: two fed with the experimental and two fed the control feed.

On GMF’s part, during November 2021, seabream juveniles reared together in one large sea cage, were equally and randomly distributed amongst the four, smaller-sized trial cages, ensuring almost the same average weight and number of fish in each cage. The number of fish was such, that by the end of the trial, and when the fish will be above 300g, the density of the cages will not surpass the density limit (kg/m3) of organic culture. Regular weight samplings performed by GMF, will ensure that the growth performance of every cage will be monitored throughout the course of the trials.

The results of the trial are much awaited in GMF, since a new product that will be sustainable but at the same time cost efficient is to the best interest of every organic aquaculture producer, and GMF has the opportunity to try such a novel product first hand!